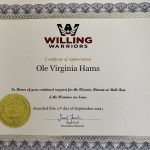 On Saturday, September 11th, members of the Ole Virginia Hams supported the 4th Annual Warrior Ride. The date for this ride was chosen to honor the fallen, survivors and heroes of that fateful day. I am pleased to report, “Mission Accomplished”!

It was a beautiful day for a bike ride. While it got to 79° in the afternoon, the morning ride was cooler, with no humidity. Additionally, the variable clouds all day kept the riders cool and in the shade while the day wore on.

That is not to say the day was without its challenges. 3 separate bike rides, a 13 miler, half metric (~30 miles) & full metric (~60 miles), all using the same starting route. The routes were each color coded, spray painted onto the streets at strategic intervals & every intersection. The riders were aided by the spotters & the Prince William County Police Department, who were stationed at key intersections. At the designated points the smaller rides were directed to loop back towards the start/stop point, which was The Farm Brewery at Broad Run.

There were the usual challenges: some people got a little lost; some had flat tires. With the latter, the organizers were ready with “Gear and Repair” (GAR) trucks. Those folks were back at it as soon as possible.

The two biggest challenges were radio coverage and traffic on a road ~2 miles away from our course.

We had learned last year at the 2020 Annual Warrior Ride, that because of Bull Run Mountain, radio coverage was spotty to nonexistent in some areas. Essentially, the Bluemont repeater was on one side and a lot of spotters were in the mountain’s shadow. Something had to be done.

The idea came up to link the W4OVH repeater to the Bluemont repeater, WA4TSC.

Our own Ken, KE2N (The Original Ken) teamed up with Bluemont’s Jason, N3JLT for this challenge.

By linking the two repeaters in a series configuration, we would have coverage on both sides of the mountain. While that is easy to say right here, actually implementing it was a little more challenging.

For example, if you attended the August 26th Thursday Net, we had what sounded like an echo problem. Everyone who transmitted sounded like they were in an echo chamber. Ken (KE2N) quickly figured out there was a nearly quarter second delay (240 millisecond) between the Bluemont repeater & our repeater. But which repeater? He was able solve these issues before the end of our Net.

I drove the entire route with Andy (KJ4MTP) on August 29th, verifying this innovative fix. Every spotter checkpoint was tested and verified “five nines” with our Net Control of that day, David, KG4GIY.

On the day of the event, the Nam Knights Motorcycle Club provided Willing Warriors several riders. Some stayed in front of the lead bikes and the others rode behind the “tail end Charlies” providing a kind of motorized cocoon.

The second biggest challenge was unusual traffic volume at the intersection of Mountain Road and Logmill Road (Checkpoint 4). The next main road over, Route 15 was nearly 2 miles away. But a series of car and truck accidents had closed that road temporarily and the onsite police were directing traffic our way. Fortunately, Checkpoint 4 was manned both by a PWC police officer & an OVH spotter, so the impact to the event riders was minimal.

Together, we have raised over $104,000 and growing for stays at the Warrior Retreat at Bull Run. The SOWW PledgeReg site closed on September 30th. We expect the final total to be significantly larger.

The Willing Warriors Flikr site is up with photos from the day. Many photos come from our own Ron Todd, K3FR.

To view these albums, please follow the link below in your browser:
https://www.flickr.com/photos/124309693@N03/albums

In conclusion, we would like to recognize the following people for making this event the success that it was :

Also, with Jason, N3JLT and Ken, KE2N monitoring both repeaters.

The photographs in this article are by Ron Todd, K3FR and are used with permission.